“It is the unknown that people are afraid of…”
V.N. Leonov

Twice awarded as a hero of the USSR, a legendary reconnaissance officer in World War II, Victor Nikolaevitch Leonov couldn’t have known of the most recent scientific revelations in neurobiology, which perfectly confirmed his ideas:

“It is the unknown that people are afraid of. No one wants to die. Out of two opponents one will definitely loose nerve first”.

Some people have an exceptional inborn talent for some things, so the right decisions come to them intuitively.

This is where science comes to the rescue. Having a clear algorithm of actions, we can learn to do everything that comes naturally to a few lucky ones.

The main answer to this is in our head. To be precise, in the brain cortex.

To find out, we will have to take a look at how our brain works. Three main parts of the brain are shown in the picture.

Three brains of a human

It also regulates the main strong emotions, such as fear, anger, joy and grief.

Its capacity is not enough for the more complex tasks of decision-making and deduction. Most of its functions are about survival.

You can easily understand the way these three parts of your brain work separately, if you imagine the following situation…

You walk to your apartment building, and hear a scream. Your first involuntary reaction is fear. It means that your reptilian brain gets to work. You turn in the direction of the scream, attempting to understand what is happening.

You see a person who is screaming, and try to figure out the context – this is your midbrain trying to define the screamer as a friendly neighbor, an ill-intended stranger or someone worse. Then you analyze the situation via your neocortex, responsible for decision-making.

The neocortex gives you the final answer – no danger detected, it is a drunk neighbor communicating with his wife.

This is the way and the order the thinking happens – first is survival, second is social links establishment and last comes the decision.

Now we know the pattern according to which out brain works.

The thing is, humans managed to survive and go on evolving for millions of years because they treated pretty much everything as potentially dangerous.

The same happens to us nowadays when we face something new and unfamiliar, because unlike in the picture, the real distance between the reptilian brain is not a couple of centimeters, but millions of years the neocortex needed to evolve into its current state.

Dangerous information gets covered in neurotoxins that accompany it to the amygdala, the area of our brain that deals with fear.

It also turns on the “fight (for your territory) or flight” reaction.

This is the system that allowed humans to survive up to today.

When our prehistoric ancestor met a sabre-toothed tiger, his amygdala gave out an emergency alarm, which spread to all the other parts of the brain and triggered the release of chemical and bioelectrical signals.

Thus the human was commanded to flee before he had time to ponder on it and make a decision.

Sabre-toothed tigers are long extinct, and we (mostly) ceased to live in the wild, yet our brain goes on working in the same manner.

The latest research has shown the way nowadays humans code 90% of incoming information:

Now we know that all the information goes through the reptilian brain at first.

The reptilian brain differentiates only between black and white, unless there are some tinges and hues needed.

It reacts emotionally to everything it sees, hears, smells and touches.

Its main reaction is fear. Its favorite questions are:

If you’ve read up to this point, you can probably guess, what part of the brain we should master for effective self-defense. It definitely is the reptilian brain. After all, it is responsible for our survival and safety.

Scientific understanding of the principles of brain work is what makes the Kadochnikov system different from other martial arts.

Conscious application of those forces allows a person to survive and be able to function under any circumstances, in any situation, without giving in to panic and fear, while controlling it instead thanks to knowledge and understanding.

Let us repeat the brilliant words of the legendary heroic reconnaissance officer Victor Leonov that were quoted at the beginning of this article:

“It is the unknown that people are afraid of. No one wants to die. Out of two opponents one will definitely loose nerve first”.

It is the way not to lose nerve when your life and well-being are in danger that the Kadochnikov system teaches you to do.

Thousands of people saw it after they’d learned the basics of the Kadochnikov system – an effective self-defense of 21st century.

Your inner opponent will keep telling you the same things again and again when the fear starts rising from the terrible depths – “Flee!”.

You definitely have to listen to your instincts, but what if you are not able to?

Sometimes, it is not only physical ability we are talking about. There are some ethics that do not allow you to leave your friend or a relative behind.

In such situations your inner opponent, ushering you to run, instead of standing up to the challenge, does you more harm than good. You lose the fight even before you start it. This is why despite having to listen to our inner voice we shouldn’t let it control the situation.

To take back the control, treat it as an advisor rather than an interlocutor. Stop talking to it, because…

If you snatch back the control over your inner opponent, in the end you’ll learn to control yourself and your feelings.

When you take full responsibility for your actions, your inner voice becomes your ally. People often become victims

If you let your inner opponent control you, it will make you surrender without putting up any fight.

This story that happened sometime at the beginning of the last century is a perfect example.

At that time Ivan Poddubny – a famous fighter – was at his prime. No one could beat him. There was just another match for the champion of the world title in Moscow.

A quite renowned French athlete was to compete against Poddubny, and according to the critics they were a match for each other both in terms of strength and technique.

Moreover, the Frenchman was younger. Yet the match was cancelled, and this is why starting from the moment the Frenchman got on the train in Paris he had been musing all the way on how difficult or even impossible in would be to beat Poddubny.

Every time the train arrived to a station, his inner voice – his inner opponent – would advise him to leave the train and go back to Paris.

At each stopover it would draw him pictures of drastic injuries he’d get fighting Poddubny. With each time his inner opponent grew stronger, until the pressure was unbearable.

He left the train in Warsaw and went back to Paris, whereupon he immediately sent a telegram to Poddubny: “Back to Paris, because you beat me in Warsaw”.

His inner opponent beat him many kilometers before he was supposed to start the fight.

Before we talk about means of harnessing our inner opponent,

At the dawn of the humankind our ancestors met some quite fearsome opponents, such as sabre-toothed tigers, for instance. The survival instinct would advise them to run, fighting only in case of being cornered and unable to escape.

If you feel like a coward, trying to avoid a confrontation, don’t.

It is a natural reaction to danger that was inborn and innate from a long time ago. Yet if running away is not an option, the first thing you have to learn to emerge with dignity from such a situation is to control your inner opponent, the voice of instinct or rational mind, to prevent it from destroying you in the fight which is to come, when any hesitation will equal defeat.

Here are some simple ways that can prove helpful:

Ignore the thoughts that lead you to a pessimistic state of mind. If you stop listening to what your inner opponent says, you’ll cut off his power source. Thus it will grow weaker and weaker, until it disappears.

Find a positive thought for every negative one:

Etc. This works quite well, because each negative thought feeds on some of your energy and weakens your willpower and decisiveness.

You can stop the inner dialog with the help of some repeated phrase, which triggers a useful state of mind and energy rise. Choose any words and phrases that will work for you.

It could be a simple phrase of “I can do it” or more complex text – a poem, for example, as in a short story about Yuri Vlasov.

In this story a heavy weightlifter before every lift would recite a poem by Emil Verkhan “The Sword”:

The blood of your ancestors will go off in your veins,
You’ll fail to be as strong as them.
You’ll watch life go by through the window
And never feel alive and happy.
Your skin will turn to paper; your muscles will grow weak,
And boredom will bore into you, turning desires into rust.
The dreams will become stones under your skull,
And fear will look at you from all mirrors.

When you feel hungry, you do not panic. Instead you start looking for food. To get rid of the fear you should do the same – to look for the means of controlling it.

If you know your inner opponent and have been in situations when it hindered you or, on the contrary, helped, we’d be happy to read your story in the comments.

Learn more about the training 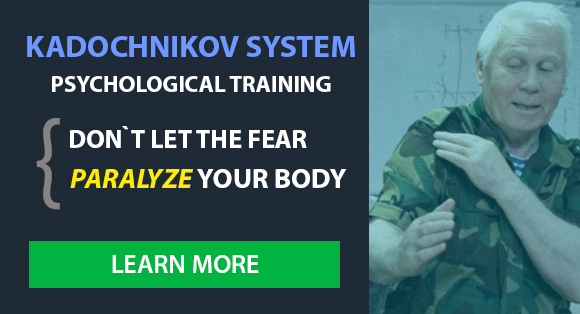 Gleb Poroger
« Previous Post How To Improve Your Psychophysical Condition In 5 Minutes Next Post » Part 2. «I came, I saw, I conquered!» – How to Make Decisions Quickly in Emergency Situations

6 replies to "Building Up Psychological Strength In The Kadochnikov System"