Mass enthusiasm for combat sports has led to the situation where even in self-defense systems people divide a fight with a weapon from a fight without a weapon.

But the most interesting fact is that according to public opinion, a fight with a weapon needs a completely different set of skills and training than a fight without a weapon.

In fact, there have appeared different currents that specialize only in fighting with weapons. All that greatly confuses people who want to learn how to defend themselves.

Following that logic, you should acquire two different sets of skills in order to defend yourself:

But in real life a fight is a fight. It doesn’t matter whether you have a weapon or not, or whether you’re attacked by someone who has a weapon – it can lie on the ground or be in the hands of the attackers, or somewhere else. There is no difference.

That’s why according to the Kadochnikov System…

You Need Only One Weapon, And That Is Your Brain

All the rest are additional instruments. It’s great if you have them; if not, you can take them from your opponent.

Watch this video and learn how we start training our brain in order to work with weapons:

As soon as you understand that:

…you’ll know exactly how to FIGHT WITH A WEAPON. You won’t depend on them while fighting, they will be just additional instruments for you.

You’ll Get An Endless Quantity Of Opportunities…

because you’ll be guided by the principles that remain the same; you can fight with a weapon or be attacked by someone who’s carrying a weapon.

Of course, on their weapon!

If you were trained in such a way that you think that in order to fight someone who is holding a weapon that you need completely different skills, then they were right.

In fact, if they lose their weapon, they may change their mind and just run away.

That’s why your skills should be universal.

That’s the approach of the Kadochnikov System.

What you’re holding in your hand shouldn’t distract you. It’s just an instrument, which is controlled by your brain. 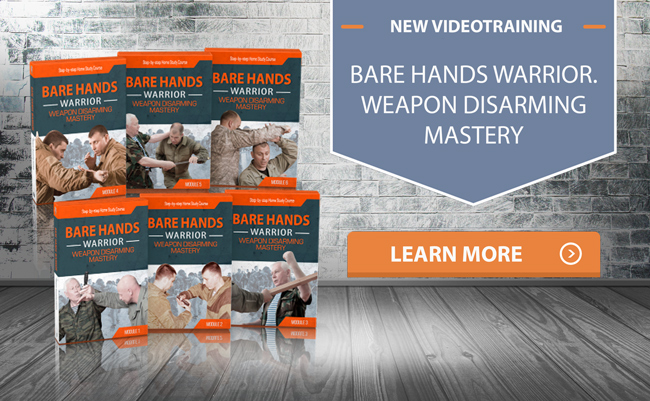 4 replies to "The Main Secret Of Disarmament"