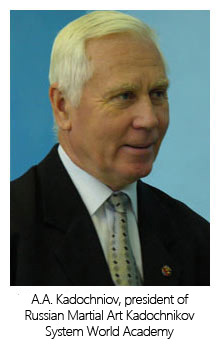 Alexey Alexeevich Kadochnikov is the founder of the Russian system of personal safety technique and effective self-defense, which has no counterparts in the world.

“The Kadochnikov System”, these two words have for a long time been a symbol of the most effective school of self-defense at the heart of which there is a scientific approach, mathematically precise movements and honored, centuries-long traditions of Russian warrior training.

The name of the creator of the System (Alexey Alexeevich Kadochnikov) is connected with the rebirth of the interest in the latter half of the XX century for the Russian martial arts as a system of the warrior upbringing and training.

Alexey Alexeevich Kadochnikov has been developing the System of personal safety technique and effective self-defense for more than 50 years (since 1962), which has not only revived the glorious military traditions of Russia but also has created the modern scientific framework and ideological basis that doesn’t have deserving counterparts in the world.

And, although a great number of imitators and impersonators of the Kadochnikov System have appeared during the last years, nobody could have got close enough to such a combination of simplicity, availability and improbable, sometimes fantastic, efficiency, which indicates the Kadochnikov System. Not to mention the fact that 77-year-old Alexey Alexeevich doesn’t only train other people in the System but also continues to be engaged in his scientific researches today. It creates admiration.

The results of his work – thousands of followers most of whom are military men, law enforcement officers, including the employees of the most elite divisions of power structures and departments. Most of them are officers and generals who train the men entrusted to them in the Kadochnikov System. It has saved hundreds of lives and also thousands of people who could keep their health and working capacity due to the received knowledge.

In the modern world, which is literally ”flooded” because of hundreds of kinds of martial arts and single combats, the Russian system of self-defense and personal safety technique is fairly considered to be the most effective one. It is popular in many countries all over the world. 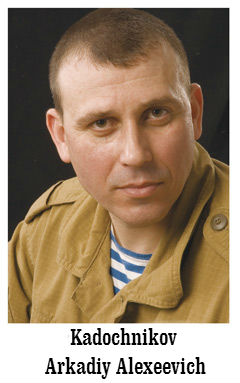 Arkadiy Alekseevich Kadochnikov is a professional military man (lieutenant colonel in reserve), a specialist in the sphere of specifically, professionally applied training of special forces personnel, security and military structures.

He has held hundreds of seminars and master-classes in Russia and different countries all over Europe, at which thousands of people have got solid skills of effective self-defense and personal safety technique.

He is the author of mass media educational and methodological materials, books and articles about self-defense problems and professionally-applied training for extreme situations.